Like people across the nation, Wiley|Wilson employee-owners watched in horror as Hurricane Katrina made landfall and devastated the Gulf area ten years ago, August 29, 2005. Despite the warning that the storm was eminent, the area and its citizens were ill-prepared for the damage the storm would cause — especially when its levees began to breach.

Wiley|Wilson was asked to participate in recovery efforts and ten years later, those projects stand as the more memorable ones for those employee-owners who assisted.

“We got a call from KBR [an engineering, procurement, and construction company], who had a contract with the US Army Corps of Engineers,” explained Tim Groover, PE, President and COO. “The mission was simple. According to KBR, ‘We need people who can hit the ground not knowing what the scope will be. We might be designing and overseeing conversions of warehouses to morgues depending on how many casualties there are.’”

Assembling a team proved difficult given the vague scope of the work. Plus, scenes from the area replayed on major news stations for weeks after the storm and they all painted the same picture: a devastated area that appeared uninhabitable yet in dire need of major recovery assistance. In its Katrina Relief Support Project Plan, KBR explained that the storm had created an emergency situation and the area was subject to numerous dangers, including “contaminated flood waters, damaged structures, damaged utilities, reptiles, and vandals.”

Senior Vice President Neil McSweeney, PE, who helped coordinate efforts with KBR, is remembered as summing up the project approach succinctly: “If you need to know exactly what we’re going to be doing, then this isn’t the assignment for you.”

Fortunately, the scope did not include any morgue-building, as the number of fatalities was not as high as projected. However, the water was as high — if not higher — than estimates, and that became the focus for the team. “We worked with the Corps to dewater New Orleans and the surrounding parishes. Basically, our job was to coordinate the pumping of water that had breached the failed levees back across the repaired levees in order to dry out the southern portion of Louisiana,” Tim explained. According to Neil, the company got the go-ahead to proceed on September 8, 2005 and an advance party traveled to Houston to pick up the RVs that the team would be living in during their time there. “Houston was filled with refugees,” Neil recalled. “Bus after bus dropped off tens of thousands of refugees from New Orleans into Houston. Katrina drove an estimated 240,000 New Orleans area residents to Houston. I can still picture the massive crowd of refugees outside the Houston Astrodome.”

The advance team convoyed to KBR’s base camp in Baton Rouge on September 11, 2005. The team had to show proper authorization to even enter the area as interstates and highways into New Orleans were shut down. They set up operations in New Orleans the next day.

Teams of employee-owners traveled to the area in waves and by the time the second wave arrived, progress was being made in various parishes. Tim led the efforts in Terrebonne Parish, where he was on site for roughly three weeks. “Over the course of about two weeks, we pumped around 5 billion gallons of water out of the parish,” he said.

Project Manager Corey Clayborne, AIA, LEED AP BD+C, was in the second wave of employee-owners to arrive for additional support. Originally he performed visual assessments of existing pump stations in Plaquemines Parish and later managed a group in Houma, LA, performing similar tasks. “The image that remains ingrained in my mind was a tractor trailer in the top of a tree, impaled by a tree branch,” Corey described. “I took a picture of it and not long after, a nearly identical picture appeared in TIME.” 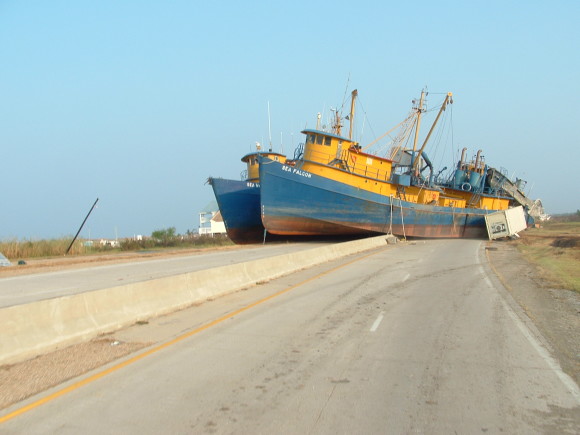 Similar feelings of disbelief and shock were echoed when other employee-owners recalled what they saw after they arrived in Louisiana. Tim described the experience as surreal and the devastation was unlike anything he’d ever seen. He also explained that the devastation to the parishes was different than what happened in the city.

“I remember seeing a family (father, mother, and three small children), whose livelihood was fishing, sitting on their front porch waiting for the Salvation Army to deliver the meal for the day,” he said. “Their house was surrounded by four feet of mud. You could only get to them by walking on sheets of plywood. You would sink in to your chest if you tried to walk on the mud. Their fishing boat and dock were gone. So they just sat there all day, waiting for food and wondering what their future held.”

Stories like these are, unfortunately, the norm and not the exception. According to estimates, Hurricane Katrina killed nearly 2,000 people and affected more than 90,000 square miles of the US. In his 2011 letter to the president of the American Society of Civil Engineers, Raymond B. Seed, PhD, professor of civil and environmental engineering at UC Berkeley, described the levee failures as “the worst civil engineering disaster in US history.”